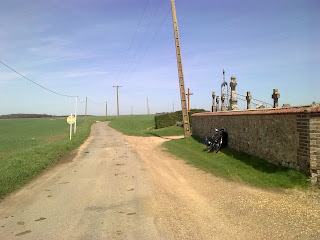 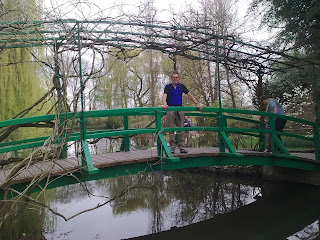 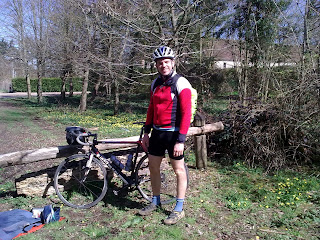 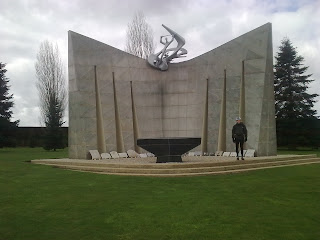 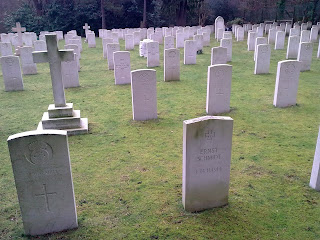 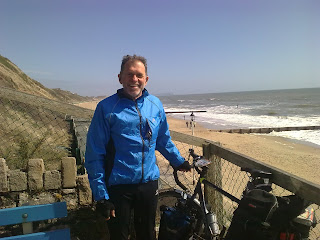 Away a week now. Covered 300 miles in five and a half days with one flat tyre and a rattley pannier rack, so cannot complain. Best part is the weather which has now warmed wonderfully. Leaving UK was pretty wetas Mark and I met in Portsmouth in the middle of a huge storm at 7.00pm after each having a demanding ride of about 60 miles (although his took only a third the time mine took, but mine was demanding because of the problems in finding the Solent way along a very muddy and wet shoreline and having to negotiate through the architectural bliss of Gosport.
Once here we had a splendid day together with early morning market in Caen, then ride to the Polish cemetery near Falaise, followes by a wonderful tail wind thqat took us to Trun and then south to the Museum that tells the story of the Battle of the "Fally Gap" that my father's regiment fought starting on his birthday, 17 August 1944, ending on 20 August when the gap was closed and thousands of Germans were locked in. The scenes depicted were truly horrific and qa blight on such a beautiful landscape, which forms the escarpment at the edge of the Isle de France plateau.
The following two days were spent cycling across the wonderful orchards and then arable lands towards Paris with wonderful quiet roads and a lot of father and son chatter as we wended our way. Mark likes to average 30kph plus while I manage 20kph only. So he helped me and I did my best. We had great accommodation, but managed to enter no bars in th three days - what does that say?
Today has been a day off. I am at the youth hostel in Vernon, which is fine, although lqte lqst night when I thought I had the room to myself a guy of about 65 arrived. He can best be likened to Estragon frm waiiting for Godot. He told me he lived in Paris in a cave since 1964, which seemed in character until I realised the true meaning of cave. Apparently he was booted out of his cellar in 2009 and has been living in youth hostels ever since, poor chap as I am sure he has a bad heart complaint.
So today the sun shone and I spent the day in checking the bike over and then riding it to Monet's garden and the impressionist museum at Giverny. Tomorrow it's north towards the coast to seek out the fabled Cafe Eu.
Love to all.
John