Biking in the Balkans

Hello those of you who have been wondering where I am after a break of almost 16 months since the last update. Well now it's a BALKANS RIDE!!!!!

I am writing this sitting in an internet bookshop in Belgrade having yesterday completed the first 592 miles from Domacyny in Poland via the Carpathians in south Poland, Slovakia, Hungary and northern Serbia. It's been very hot and dry with temps in the upper 20's or 30's every day apart from the mountainous bit. But my cycling friend Ken, who is due to join me later day when he arrives from England has brought the rain and cold with him - it's pouring outside and the temperature has dropped by about 10 degrees.

So, a few reflections on the journey thus far :-
Now how about some pictures.

These are of Kasia, Andrej's wife, Adam, her parents and Leszek, my deceased cousin Christina's husband. We'd just had a Sunday afternoon meal on the farm. The next is of Darek and Katerina with their two sons Jacub and Kaspar - they were just about to drive back to England after a month at home renovating their lovely old farmhouse - what a change in since I stayed there in 2005. 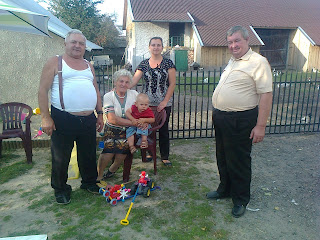 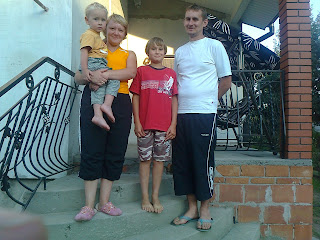 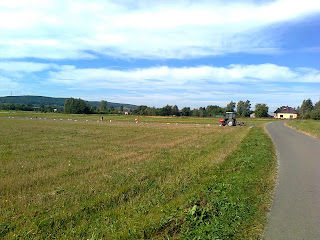 And this proves that I did indeed visit Agnieszka's village 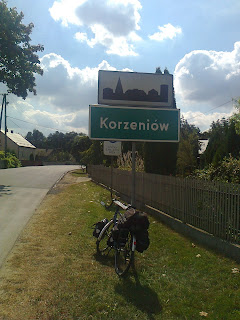 Now into Slovakia, this was taken at the highest point of the Carpathian crossing - not very high really! 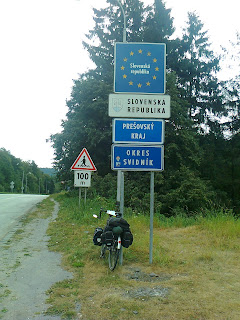 I then took a small side road to get off the main drag - through tiny villages that have been systematically depopulated through war, famine and ethnic cleansing - the people who lived here practised a Greco-Catholic religion, all that remains of them are their beautiful wooden churches. 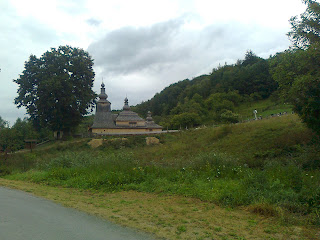 That night was rather grim, with nowhere to stay, but the next morning the landscape made up for it as the suN emerged and warmed us all. The a speedy ride to Hungary - that's it in the distance in the second picture, with vineyards staring to appear on the slopes. 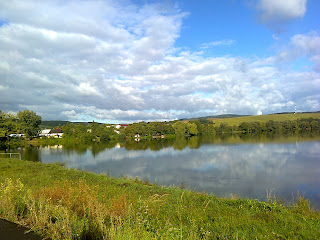 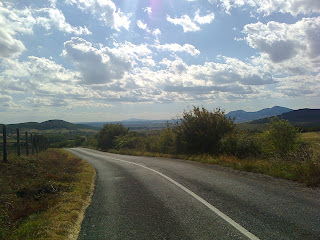 So, into Hungary and to a lovely unpronounceable place called SATORALJAUJEHELY! Here's the border crossing followed by a picture of the cared for pristine town square. 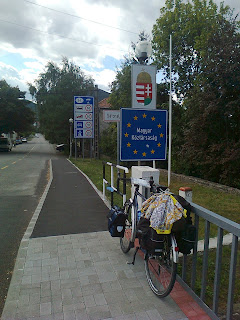 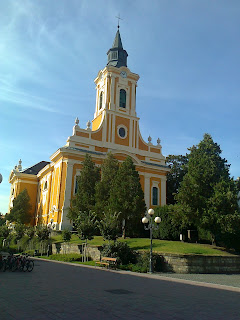 Not that everything in Hungary is up to date - here's my first horse and cart up till then, many since though. 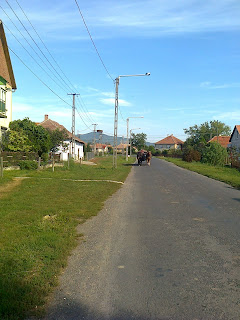 But really Hungary is very civilised how about this for a bus shelter. I took the picture because it was here that the local police almost impounded my bike as I left it unattended when nipping into the cafe next door - now, would you get that level of service in England? 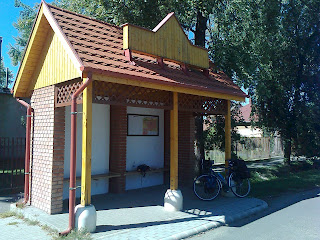 My next destination was Tokaj ,where I had my first day of rest. It's famous for the sweet wine of the region used as a dessert wine normally. A lovely place where eastern Hungary's two main rivers meet the Tisza (it's massive) and the Bogrud (I think). I took this at the join of the rivers. 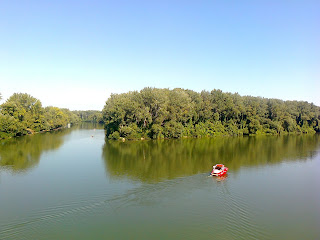 There then followed 3 days of pretty hard riding averaging 70plus miles everyday as I crossed the almost totally flat plain towards the border with Serbia in the south and the meeting of the Tisza, which I followed on mostly good bike routes, with the Danube close to Szeged. Everyonce in a while there's a ferry crossing, normally a wire restrained wooden vessel powered by a puttering diesel or an outboard attached to a small boat roped alongside - all very basic, but worth it given the small amount of traffic and the width of the river. 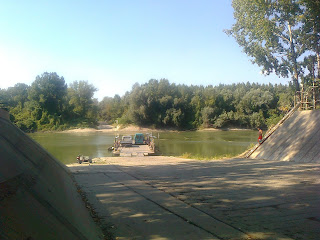 I camped a couple of times, but on one occasion I arrived tired at 6.00pm to find no campsite "es ist Kaputt" in the words of a local (they speak a lot of German down there - something to do with the Austro-Hungarian Empire or war I imagine). I asked a second opinion from a lady out running she said the same, but said wait a minute. Not knowing what to expect when she said come with me I then found myself being offered a night in a cabin in a closed down children's camp, so here's my abode! 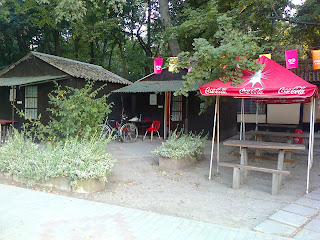 And so to Szeged a small city of elegant churches ceremonial halls and theatres and parks lying by the Tisza River, on which it depends for its affluence and which has also destroyed it at least three times. The first photo is of a statue of the the town's water engineer in the 19th century, the plauques at its base (bottom left show the high water level in 1997 and 2006 - and this park is well above river level now!) The second picture is a statue depicting the people in 1956 attempting to support the butterfly of freedom that was trying to fly at that time. 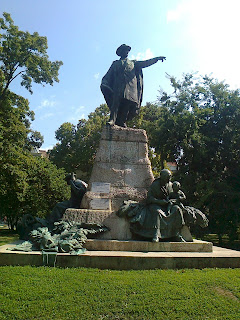 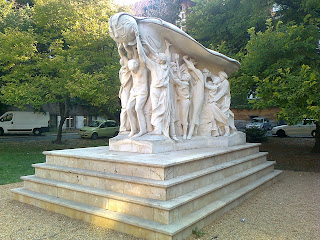 Now, there's no picture of me crossing the Serbian border. It's much more formal and the crossing involved me having illegally (??) to cycle down the motorway for about 10 miles, so pictures weren't uppermost - border guards and police are mostly full of their own importance and it's not worth trying it on with them. Soon, however I got to Palic, a small resort town close to the border that Liz and I stayed in in 2009. This picture will prove to Liz that I went there - it's not the two of us! 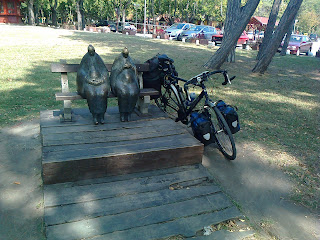 Next stop was Subotica. It's renowned for its Art Nouveau architecture - is this that?? 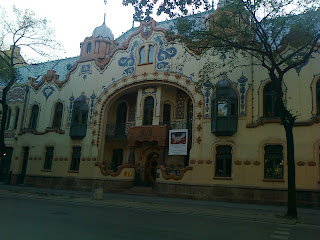 Then on through hot steamy Serbia to Novi Sad. Another ex-communist country, its people are now thoroughly westernised, but its social infrastructure has a lot to be desired - here a picture from a bar (lots of Cokes drunk) showing a typical town street with the usual rather grim blocks behind - it must look drab in the cold snowy winter. 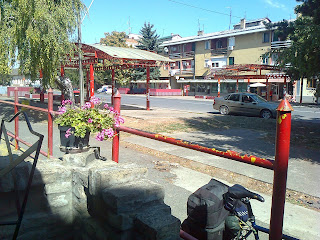 Novi Sad, where I spent a couple of nights is known for hosting one of the biggest music festivals in Europe - Exit. It's held within the walls of its Citadel which overlooks the Danube. The first picture shows the city square - note that elegant brick church (it looks better at night) alongside the drab communist era block. But its full of life and both evenings there was local folk dancing in the square and a real festival atmosphere. 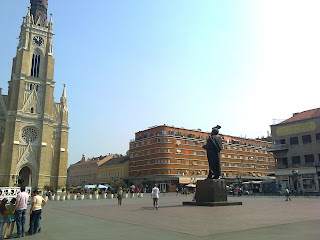 I made a visit to the Citadel, it has the most amazing fortifications, all bastions and star layouts allowing the best chance to get at the invaders. Here's a picture taken from the bridge whose predecessor we blew up in 1999. The memorial records the death of a young civilian - "collateral damage". 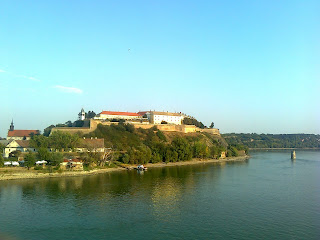 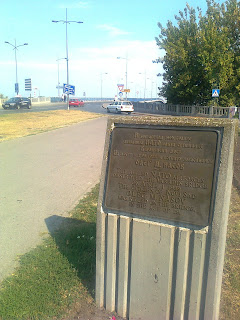 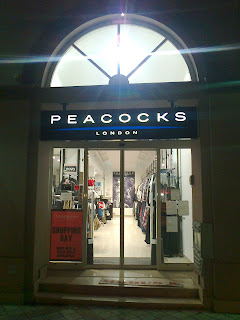 That's all for now. I hope it hasn't been too tedious. If you've got this far - well done!! I'll make sure not to do another for some time. In fact cannot imagine when that might be. But I'm sure I'll complete with the next leg at some stage, probably after Ken and I have done south Serbia, Montenegro, Albania and are in Greece.