This blog is written in a high mountainous ski resort in central Montenegro. It has been 9 days since the last blog and since then Ken has turned up in Belgrade and we have cycled up into the mountains out of Serbia and into Crna Gorna, Montenegro to us. It has been hard work so we decided to take a couple of days to rest our tired old bones!

Belgrade was OK, but not particularly inspiring. You will see what I mean from these two pictures - me on the castle ramparts and Ken outside our Hotel. 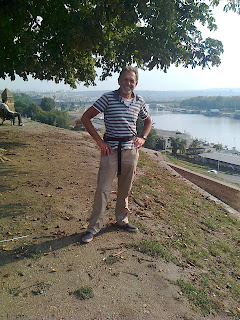 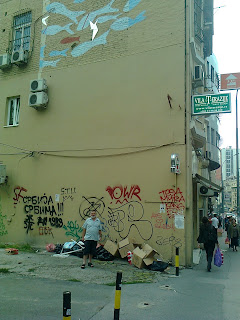 Actually the Terazie was not as bad as it looks and it was very central. But we were pleased to head out to our next place which went by the wonderful name of Ub. It was just a way stop and we were really heading for the first mountains at Divcibare a Serbian Ski resort at about 1050 metres. That was probably the hardest climb as the road was not graded for anything but local traffic, so was very steep in places. The next three pictures show the roads as they got steeper and a typical farm, this one with a still if you look closely. 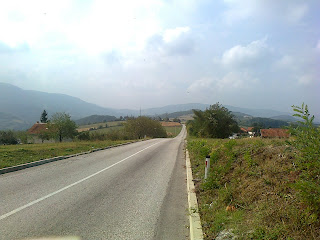 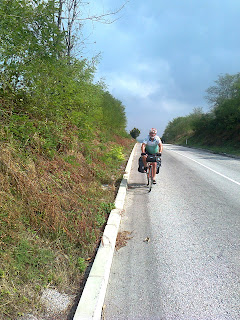 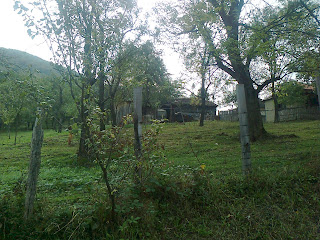 The next two pictures were taken last Saturday as Ken and I whizzed away downhill from our small ski hotel out on to the rolling hills that rise gradually towards the Serbian border. There were lots of very traditional farms with hay stooks ready for the winter and everywhere people getting in their huge supplies of logs to see them through the snow that is not far away now. 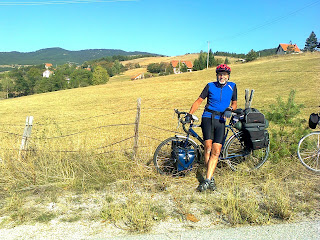 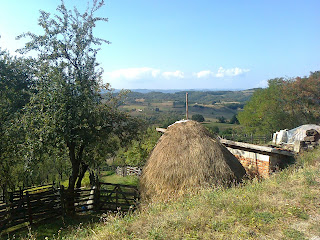 We stopped at a town called Uzice, probably one of the most uninspiring places, but we had little alternative given the lack of choice of any other roads to take us up and to the border. The hotel was the worst of all. It must have been built in communist times and is now semi derelict. It had my great big Serbian wedding going on in the restaurant as we arrived. We were sent up to the 4th floor to a really tatty room where most things did not work and were falling apart. The next morning the lift was broken so we had to walk down to the ground floor - it was then we realised that the bottom three floors were like building sites as the rooms there had been taken out of use, probably to re-use the bits on the floor above. We also reckoned it was designed to look like a space rocket or the tower out of Close Encounters, which was a popular film when the hotel was built. Here it is. Ugh. 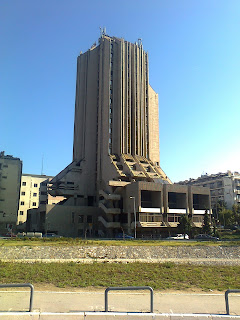 The following day we climbed hard amongst all the traffic to get up to Zlatibor where the scenery changes to high Alpine. It was lovely leaving our ski chalet the next morning bound for our last stop in Serbia before the border. At least the cycling made up for the next hotel we got to. This was much like the last, but even more rundown. Here it is below. It was probably built at a time when the middle class communists were told where to go on holiday, so they built places like this up in the mountains. But, the kitchen did manage to rustle up one of the best steaks ever for only 3 pounds! Here it is with me leaving for the border on a very cool misty morning. 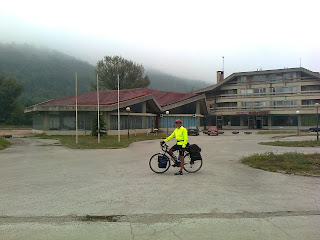 Frankly, I was pleased to leave Serbia. We met some lovely people, like the old lady who found us eating lunch sitting on her wood pile and promptly brought us nuts, plums and apples to eat, or the couple who invited us in for coffee and were keen to talk about Serbia and its past problems and how those affect it now - bad reputation, lack of tourists etc.. But getting to the border was good and as we did the weather brightened, cloud lifted and we were in sunshine for a wonderful ride to Prijelo Polje the nearest big town. Here is Ken sorting his stuff out and the following picture is of the view back to the border. 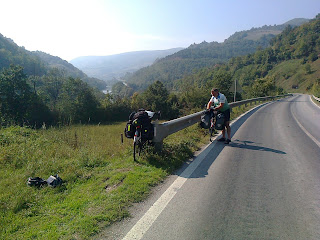 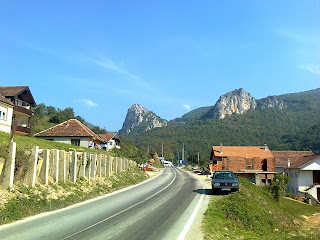 Suddenly things seemed brighter with people seemingly smiling more and more of a holiday atmosphere. That day took us to Mojkovac, which is not too impressive apart from the fact that it sits on the Tara River. Ken also tells me that we did a continual ascent for about 45 miles that day! Here is me just about to descend to the River plain and the next picture shows Mojkovac with the plain. 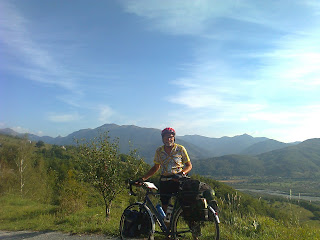 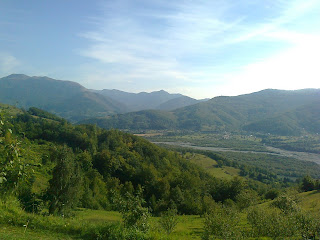 Now, at ti stage we could have carried on over the hills in the distance direct to Podgarice, the capital, but we had heard from some German cyclists we had met that the Tara River Gorge, which is a Unesco World Heritage site must not be missed, so that is why we have meandered up here, adding about 4 days to our journey but going through the most magnificent scenery I have ever biked through.

This next picture shows is taken looking back up the valley towards Mojkovac. Huge steep sides with little flat areas of farmed land wherever possible. 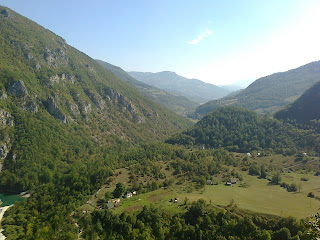 Then you get to the deep gorge, which at this time has a small river running and is enclosed by massive steep walls. These pictures do not do it justice - there could have been more of them, but we were enjoying the whizzing down so much that the pictures just did not get taken. But the vast bridge at the end, where we turned off to climb up the mountains where we now are gives some idea of the scale of things. 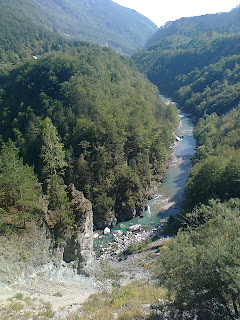 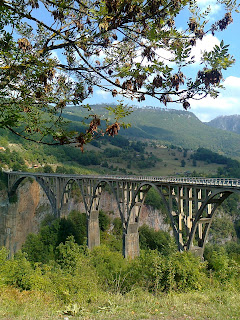 Whizzing down is fine, but it does mean a climb up. In this case it was a 10 km climb rising to 1385 metres. We had to pace ourselves on that one! Here is a picture of what greeted us when we had done the climb. The last is a view from the chalet where we are staying. 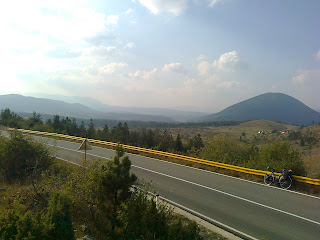 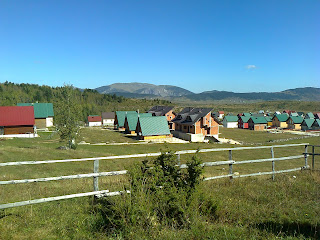 So, tomorrow we set off across more mountains before descending into the river valley that will ultimately take us down to Podgarice two days from now. Then it is into Albania on Monday and hopefully into Greece by the weekend of 8 and 9 October. All going well the last blog will be done from Levkas sometime around then.

That is it for the moment, next blog in about 10 days. Love to all who read this.