The end of the last blog was written from the top of the mountains in Durmitor, Montenegro. At that stage I had resting due to a tummy bug rather than the cycling. So it was with great relief that Ken and I set off one cool morning very early to cycle down to Niksic. This picture was taken after a 100 metre climb and at a point when the tummy cramps had just ceased and the going got really good - a new beautifully engineered road!!! 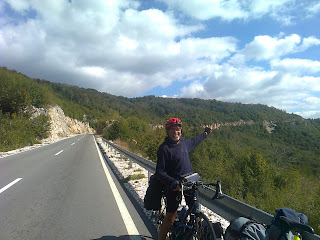 No pictures of Niksic, which is a pity as it really is a lovely town, home of the Montenegran Niksic brewery. But, Podgorica, the capital beckoned and it was DOWNHILL!

Unfortunately when we got there poor Ken was feeling poorly, so we headed for the first hotel on the GPS - the amazing main city hotel built in 1953 at the height of the communist optimism. Despite feeling rough, Ken still managed to irk them by cycling into the foyer across their red carpet. Here's a picture from our balcony with the usual end of ride laundry drying. 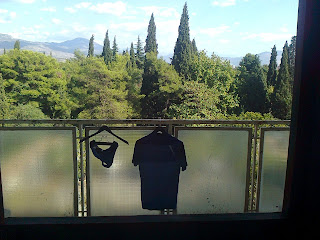 Podgorica is strange. Given that it's a capital of a country og about 3/4 million people and itself has only 150,000 people it's not surprising that it's so quiet. The main square hots up in tyhe evening when folk go walking with their best clobber on, but otherwise everything I tried to see was closed - Natural History Museum (which is alongside this tower from the days of Turkish rule), Museum of Modern Art (which is in a lovely cool park alongside the river running through town). So. it was rather boring waiting as ken recuperated. 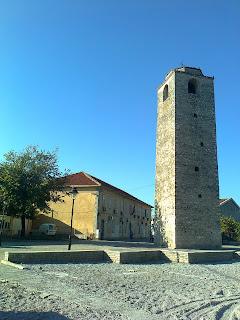 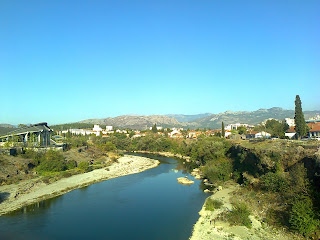 But, here he is as we left the hotel at 7.30 am bound for the main border with Albania about 15 miles away. That's the hotel behind - lovely innit! 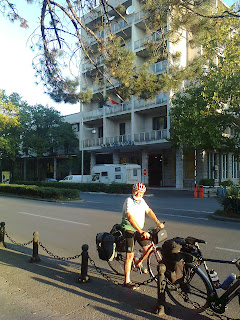 The road to the border started well, but soon deteriorated to a windy dirt road. That's because after many years of closure it is being reinstated. But it's tough on cyclists and took ages to negotiate. Crossing was easy, after which we really felt like we were in bandit country.
Here's our first sight of Albania - Lake Shkroder in the early morning mists. 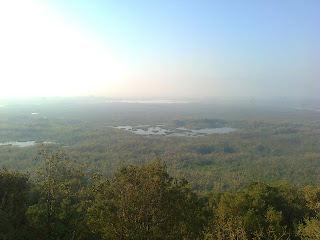 There's also a railway crossing the border, but it hasn't been used in years - so now it's made best use of by sheep and goats see below! 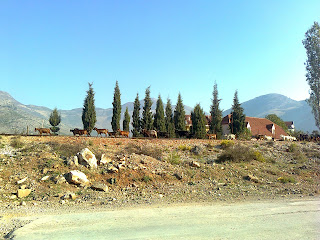 There then followed two days of hot cycling on roads that really did improve after Shkroder. People there are so intent on progressing, hence all the new roads and helpful welcoming folk, like the guy who escorted us on this scooter all the way through Shkroder so that we could get on the right road. Or the girls in the Red Bull mini who accosted us and plyed us with cold drinks and took photograhs as we enterd another very hot town. 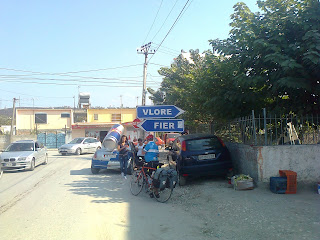 Our route was via Shkroder, Durressi, Fier to Vlora where we left the plains and started to head for the mountains in the south. This picture is at the end of the coastal plains and shows the only rolling stock we saw on any of the miles of railway that still exists. It was two carriages and a diesel going at walking pace! 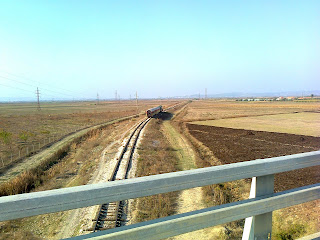 Here's Vlora, a lovely resort town now frequented by many hard up Italians keen on getting a cheap holiday, there are direct ferries to Italy from here. 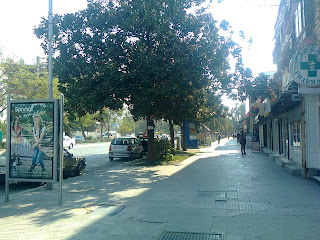 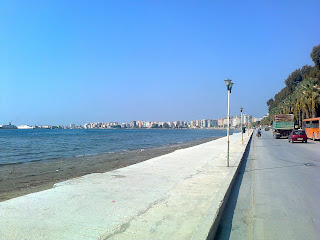 As we hit the mountains the weather really changed, with massive thunderstorms and torrential rain. We spent two days climbing and descending the most amazing roads I have ever seen. On the first day we climbed from sea level to 1045 metres in 24 kms and took 4 hours doing it. I was forced to push the bike over much of the last 4kms as it was too steep even for my gearing. Another memory of that day is sheltering from the rain in a honey seller's abandoned shelter thatched with bracken as the storm raged around. Getting good pictures was hard because of the swirling mists and rain, but here's one of our descent to the coast. 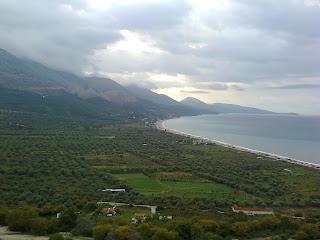 After a night in Hamare we headed south through gradually easier terrain bound for Saranda where we were aiming to get the 1.00pm ferry for Corfu. We managed to lose each other, and by text message found each other at the ferry office 10 mins before the ferry was due to sail at 12.45 pm!!! Gulp, but we managed it and had a great trip by aging hydrofoil to Kerkira, drinking the beer that Ken had purchased with the last of our Albanian Leks as we went. It was two happy guys who landed in Greece that afternoon. Here's the port with strom clouds still looming. 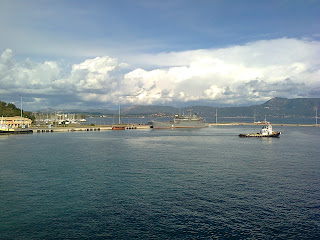 The following day we took the ferry for Igoumenitsa and cycled south for two days bound for Levkas. There's little to remark on apart from Ken's broken spoke (and the wonderful scenery of course), here he is repairing it at the top of another climb, but with a good view of Levkas for us in the distance. 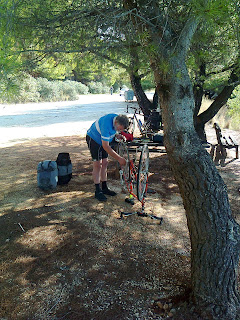 So, we got to Levkada at 4.00pm on 10 October and here's the proof, with me by Simmare. Later today we are off to Sivota at the southern end of the island to leave my bike at Martin and Sue's house, ready for another adventure somewhere, who knows where, in 2012 or 2013.

I am very please to have completed this journey so successfully though and to have discovered so much wonderful country and such friendly Balkan people. I am sure I'll be back!

Best wishes to all my readers (both of you!) 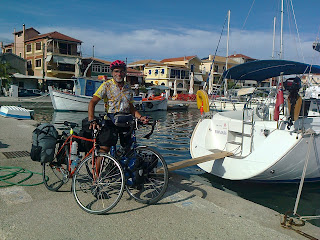