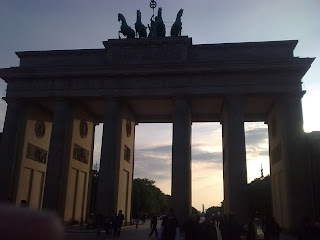 Hi Everyone from Rainy Poland!!

Ken and I are holed up in Wloclawek about 100 miles from Warsaw. Big floods in the south so we have decided to stay on a day in this hotel which is very plush, was a salt mill and is a complete contrast to the other places we have stayed.

The picture above is of the Brandenburg Gate in Berlin, which we left a week ago. We had a fine time there, although I found much of what I saw profoundly sad. Below is the Reichstag which Hitler defied and ignored as he built up his Third Reich. Below that is the Holocaust monument next to the Gate, which is built of huge concrete blocks resembling tombstones which you sink down into as you walk through. It is vast and is built on land which I believe was occupied by the Wall and nomansland before reunification. Behind are the blocks of buildings which comprised East Berlin and still mark a virtual divide between the more salubrious west and the crowded tenements you find all over the former Eastern Bloc, even outside small country villages.

We took a walking tour with a Dutch American guide who was full of anecdotes. The plaque in the ground commerorates the book burning that took place in the square in the next picture which has Humboldt University behind. The Nazis denounced socialist, Jewish, slav etc writers - how sad, George Orwell might not have done too well, but what of Zola or Dickens? 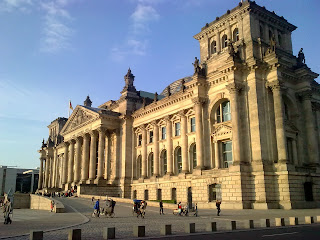 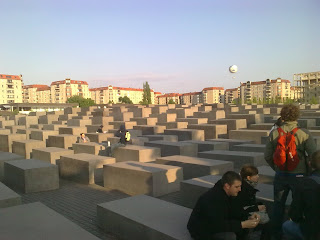 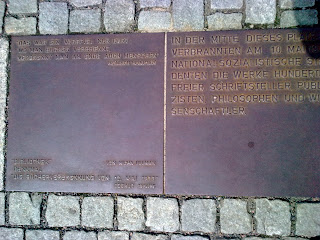 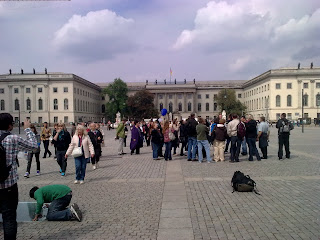 Another scene of great sadness is, of course, the Berlin Wall. Much of it has gone, including Checkpoint Charlie, but there follow two pics, the first near the centre is preserved (you cannot hack bits off as souvenirs any more - in fact they reckon the souvenir sellers have already sold far more wall than ever existed!) and the second we saw on our way out. It serves as a vast art gallery - Banksy would have been at home.

Before leaving though we had great fun visiting an unsad part of the communist legacy - the famous TV Tower which the East Germans built ostensibly to broadcast from, but which has a very god view to the west.....................! I had been put onto it by Wolfram LIbermeister a lecturer form Humboldt Uni I met in Amsterdam. He met us there after Ken and I had been up for the view and to celebrate his 65th birthday - that's him with the cake. 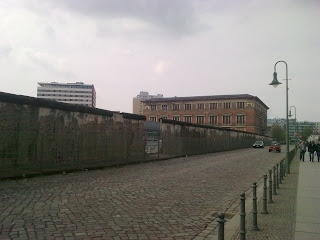 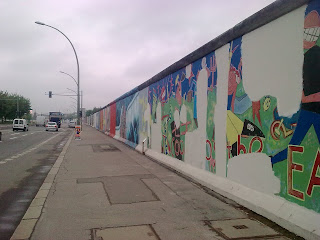 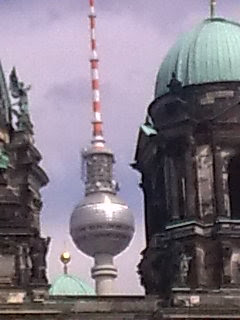 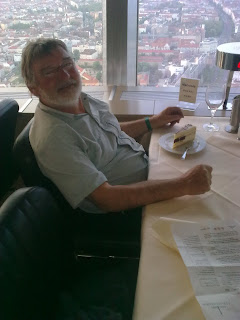 We had two more days in Germany before crossing the Oder into Poland. Here's me before crossing its vast floodplain. Wonderful ox bow lakes, but I'll not bore you with more Geography now. We crossed into Poland on an overcast evening passing the deserted guard posts before arriving at The Bastion Hotel in Kostrzyn where we learnt about the Polish love for piped pop music. But the people have been so lovely and friendly. The roads have been another matter, but more of them later. 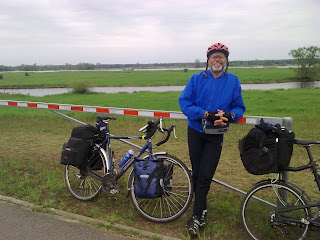 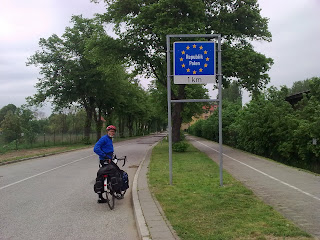 A couple of days travelling in warmer conditions than we had had as we left Germany got us to Poznan. That's its old market square in the picture following. All the cities and towns I have visited have had these and they are a mark of the vast trade flows that there were across northern Europe in the 1300 - 1700s, a kind of silk road European style, with evidence of many craft guilds in places like Poznan.

We stayed in a backpackers hostel close to the centre, quite a seedy place run by a guy who smoked electric cigarettes (really), But at least I got my washing done (to quote R. Daltrey). But our recent hostels have been a great experience. Favourite was Munchehof, the last in Germany and in a little village of about 25 houses where we sat with the warden to eat the meal his wife cooked up for us. That's it with the white walls. It is followed by a picture of Ken cycling away from Konin hostel, our last port of call. We envisioned a hostel by a lovely set of lakes. Well, they are, but not when you are loking out of our bedroom window at the aluminium smelter across the water! Also you'll note the huge pipes going to the hostel. We guessed these were part of the vast communal heating systems put in to serve public buildings in areas like this. Last point here, note lack of sun in most of last pictures - boy has it been cold, if not wet until today. 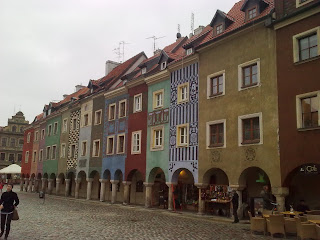 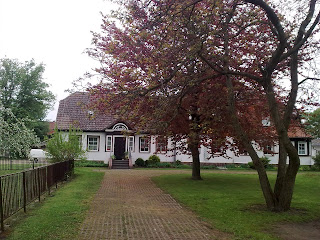 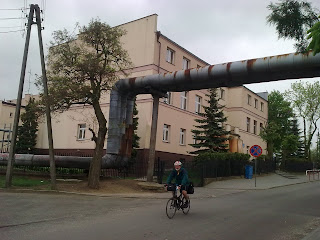 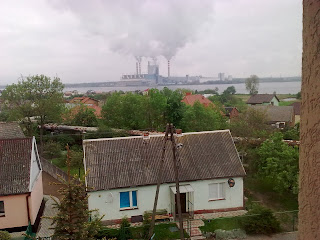 Now, about hthese roads. When they are good they are great, but when not, as like as not they will be dirt or not even exist. Ken did a great job before leaving home of plotting all our routes on cycle GPS. But we have found some routes impassable - we even did 10 mile on cobbles through fields the other day, but that's what I came here for and it's what cycle touring is all about. Even where the road runs out a you have to carry your bike - see pic of Ken! 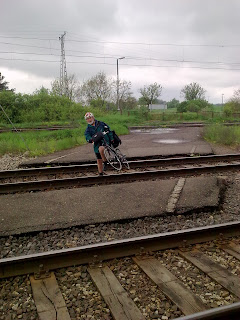 We have yet too see lots of Poland and we are sure it will be very attractive, but in the meantime, a very attractive feature right now is the decorated crosses and other icons dotted around in every village we pass, presumably this is because of the recent passing of Mayday. In fact some individual houses, however small, have their own. And the churches proliferate, many of them with wooden walls and wood shingled roofs.

So, now it's a couple or three days to Warsaw where I meet my cousin's son, Marek and stay for a couple of days before finally cycling on to my Dad's home village about 100 miles further south. Ken sadly leaves for home by train on Thursday, so I'll heve to learn to survive again without GPS to find the hotels and hostels. Will I manage?? Watch this blog space for the next exciting and probably final instalment of Surowiec's saunterings!!! 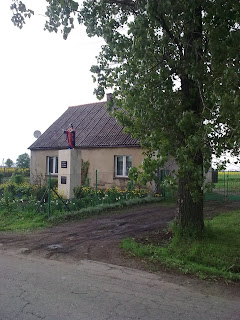 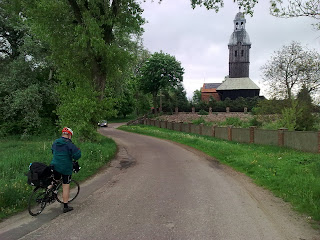 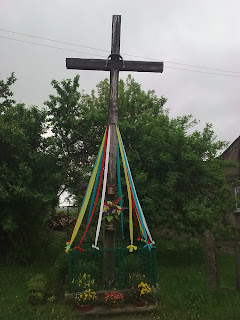 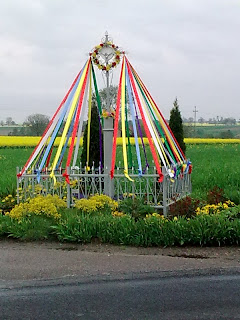