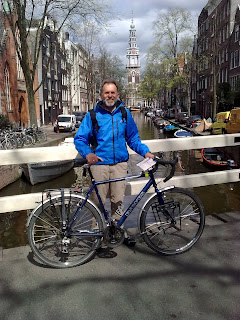 Greetings all! Now in Lubek with Ken Reed from Weymouth. It´s Labour Day here 1 May, so everything is closed and very peaceful. I have yet to find out about this city, so I´ll start with Amsterdam, which I do know a little about. That is where the picture above was taken. So glad to have had the cycle there - it is such a wonderfully planned city with a network of canals radiating and encircling the city, so unlike so many places where your bearings are buildings and roads, in typical Dutch fashion, your bearings here are water. Brown cafes (sorry, not more of Brown), wonderful Rijk´s Museum with the rembrandts and vermeers, and wonderfully friendly people. In fact it is such a friendly place that even the bed bugs at the Zeeburg Hostel seemed to take to me and seem to have remained ever since!

Leaving Amsterdam on a sunny but cool wind day was splendid as, with cycle you can be in the countryside in 20 mins. the pictures that follow show the wildlife again and the lovely canals to be found within 10 miles of the centre. 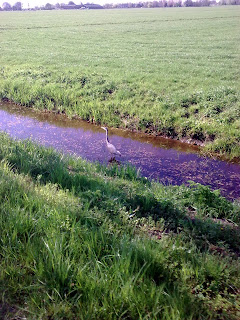 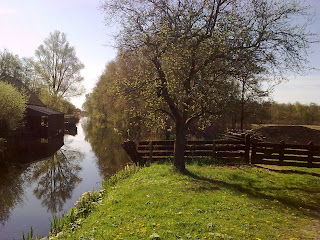 Also, I have passed a lot of reed cutting areas alongside the canals. The thatched roofs in Holland are mostly huge. Big barns with the farmhouse incorporated. In Germany I have found that they cover such houses in solar panels, whereas the Dutch seem to be sticking to thatch. The boat below was delivering reed and had just come through one of those small hand operated lifting bridges. 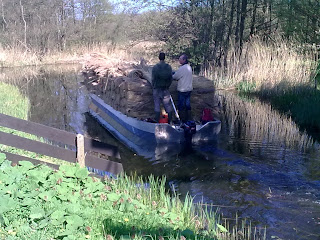 I was due to camp for three nights after Amsterdam, but decided that if the routes were good I would try to collapse the ride into two days and go extra fast. There followed lots of below sea level polder lands, much of it in Flevoland, which was created in the 1960s and has Llelystad as its principal town. You can see it in the distance in the next picture, with the Zuider Zee alongside. One visit confirmed that camping here would be uninspiring, so on for another 30 miles to a beautiful site in a forest. As I got closer, at last I saw the fabled tulip fields! 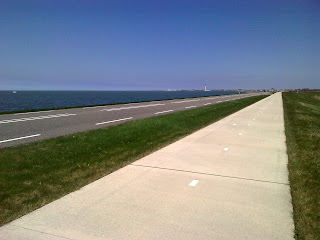 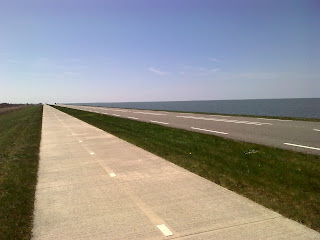 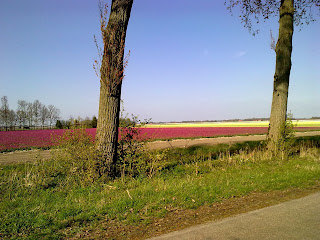 The following day was on to Emmen, which dad´s regiment helped free. I thought it would be rather lovely, but it was very new and I suspect had been much rebuilt after the war. So no photograph. But the following day, my last, sadly, in the netherlands was lovely and took me past a small town called Ter Apel. It looked boring, grid iron on the map, but on getting there was charming, with everything planned around a set of canals and with some very gracious 1900s houses. I got to talikng to a couple who owned one much like that in the picture below. They were old enough to recall the war and knew the poles had freed their town. Apparently, every 4 May they observe a minute´s silence in thanks for their freedom and on 5 May they celebrate the end of the war on that day in 1945. 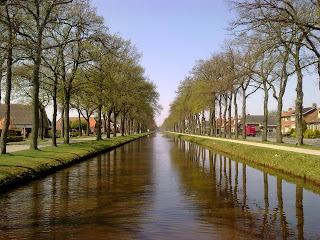 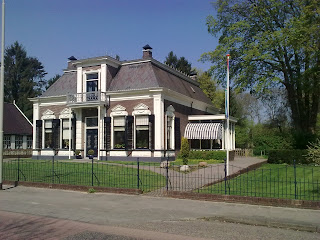 So, I left Holland headed for Leer youth hostel. Thats it in the picture below with Mark the Frenchman who was cycling to the 'Nord Cap' of sweden before heading off to St Petersburg on his World Tour. His bike weighed a ton, not to mention the trailer. German Hostels are massive and mostly empty at this time. There were only 3 of us staying with a personal room each. The effort to save a day and not camp was worthwhile as it gave me a day to get to know Leer, which is charming and has it's own ship museum - see below. While there though I ruminated on why I liked Holland so much, yet had never visited before. A few reasons:- 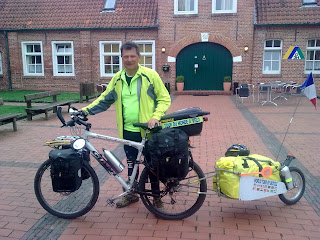 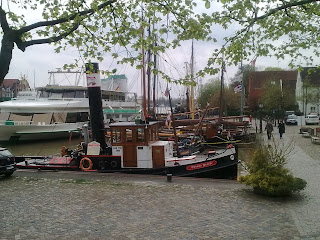 Now, I have to say that the first thing that happened to me in Germany was to be given a free beer at a restaurant on the border. Since then Germany too has been a delight, apart from the motorist who stopped me and told me that I had by law to use the cycle way supplied, even though it had a dreadful surface and I was trying to do over 80 miles that day and had already had a flat tyre. We agreed that I'd wait until the Police stopped me before I got off the road. I had to complete 82 miles that day largely because I was heading for a lovely hostel in the middle of a forest yet had mistakenly thought I could take a tunnel below the River Weser (of Pied Piper fame), but found only cars and lorries could use it. So I had to divert 25 miles in all to get across by ferry. There are two ferry photographs (very boring) but they show how you have to be careful here to check how to get places by cycle - the second is crossing the River Elbe. 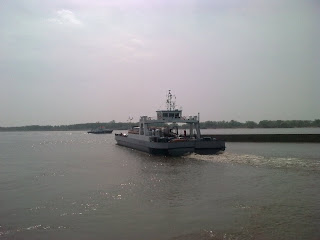 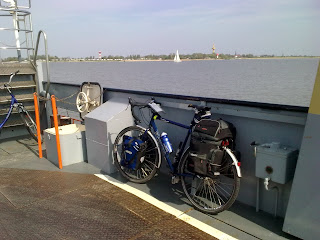 That took me to Gluckstad on the Elbe, below, which has a pretty harbour frontage and its own ship museum, with one ship - this one built south of Hull for use on the Wash and along the east coast of UK 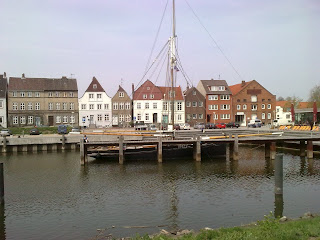 Finally yesterday I did the last 65 miles to Lubeck to meet Ken. It's an impressive city on a river island giving onto the Baltic Sea, where Ken and I head tomorrow. The weather has been more changeable of late, but the change of wind direction from NE to SW has been wonderful and has made me realise how tough the first 2 or 3 weeks were. I had trouble cycling more than 10mph on the flat often in Holland, yet yesterday I managed almost twice that speed for most of the day with the wind behind me.
So, the first part of my Pilgrimage is now done, with my arrival in Wilhelmshaven where dad ended the war on Tuesday. But it wasn't the most picturesque of places so no photograph. Now it's on to Dad's birthplace via the Baltic, Berlin, Poznan and Warsaw.
Distance so far is 1270 miles when I reckoned on only 1050 to get me here. Partly that's my mistakes en route, but a lot is down to cycle path as opposed to road distances. But Ken has his trusty GPS with all the routes loaded onto it, so from nowe on I can sit back and relax!!!
All the best to you all!! Have a good pre-election week and may the best bigot win!
John 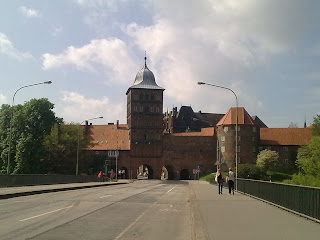 P. S. sorry about the alliterative titles, it's only done to annoy Mark who says they are cheesey!
Posted by Polish John at 02:44